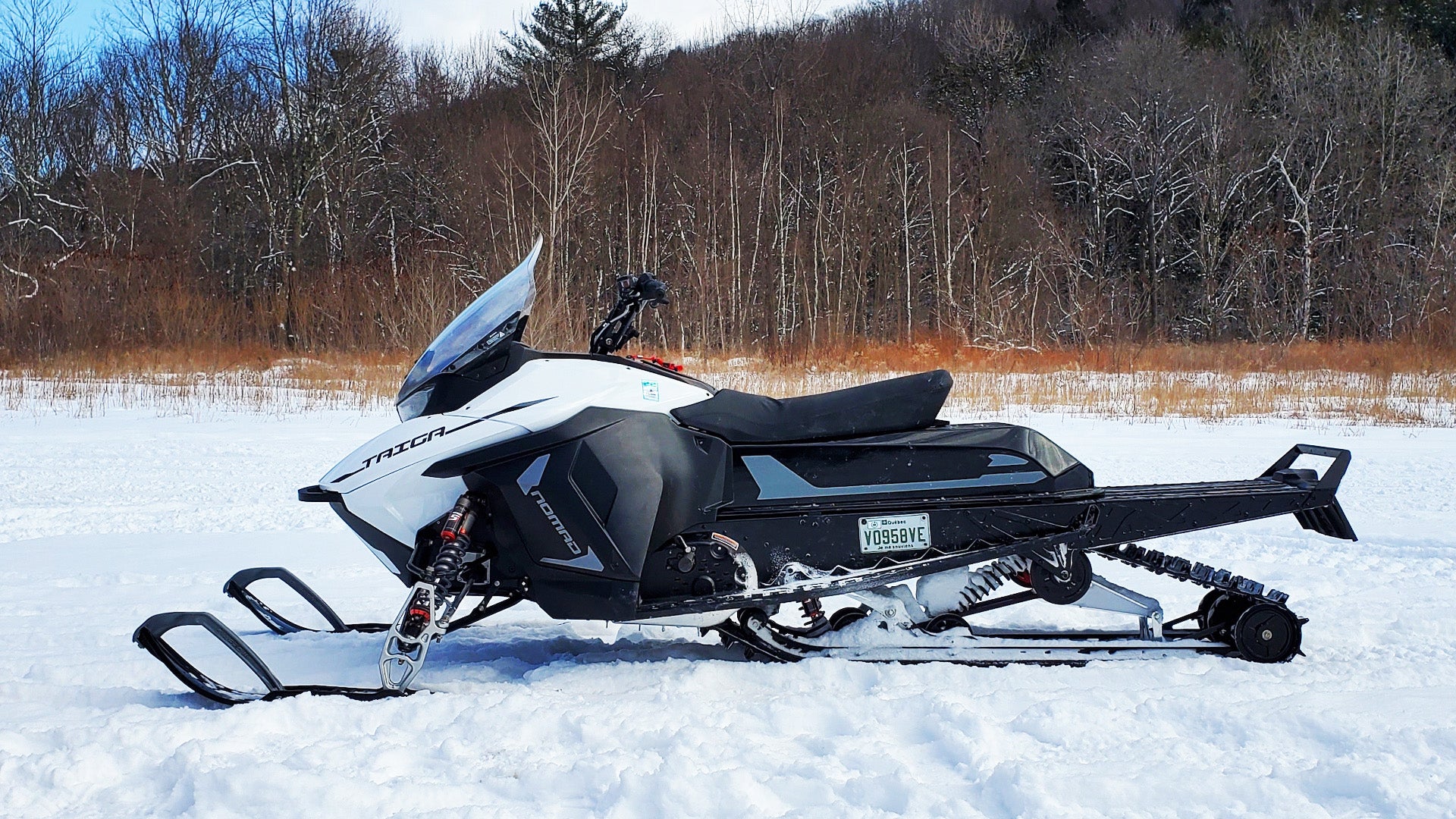 The biggest adjustment you have to make while riding the Nomad is there really isn’t any obvious indication that it’s on (just like an EV). There’s no idling engine to hear or vibration to feel. You have to check that the LED driver information cluster is glowing blue to know when it’s go time. After that, operating it is largely the same as operating a gasoline-powered snowmobile. The accelerator is on the right and the brake is on the left. It is very easy to get the hang of.

Like all vehicles powered by batteries, the Nomad benefits from instant torque but is still very friendly to a novice rider like myself. The less-insane range mode—designed to conserve the battery—still delivers a fair thrill as you punch the accelerator. Sport mode is the one you want when you’re really trying to fly, though. Hit the accelerator when in that mode and it’ll kick a mighty snap to your neck (in a good way). But at speed and on the forested trails of Stowe, Vermont, the Nomad felt extremely stable, no doubt owing to its wide track and length. I have no problem imagining a two- to three-hour cruise in this fashion—provided the battery doesn’t deplete first.

And despite it having no engine, the Nomad isn’t silent either. In addition to the grinding noise from the track, a persistent and high-pitched whir emanates from it that becomes more furious the faster you go. I frankly did not mind this; I liked it, actually. EVs sound cool and it’s unfortunate that you can’t really hear anything that isn’t piped in when you’re driving a car. Here, though, the noise is on full aural display. I don’t know how it sounds from far away, however. I’m also curious if an electric snowmobile would be less disturbing to local wildlife, but this is what it sounds like from the saddle.

Letting off the accelerator means the Nomad stops pretty abruptly, so unless you have to panic-brake, I don’t imagine you’ll need that left-hand lever very much at all. I spent a few minutes learning how to balance the accelerator with how the snowmobile naturally slowed down and found myself acclimating to its one-handle driving almost instantly. Whether I was creeping forward or using the power to maneuver a chicane, I didn’t need to touch the brake once. At one point, a crowd of gasoline-powered snowmobiles roared past, spraying the 19-degree air with acrid exhaust fumes and I was powerfully reminded of another of the Nomad’s advantages: no emissions from a two-stroke to stink up the trails with.

The one thing I had to be mindful of was the steering. At close to 700 pounds and with a wide track, there’s no power steering, so turning the Nomad at low speeds demanded more than my pandemic-lockdown-atrophied muscles could adequately deliver. My advice? Read the trail signage and don’t accidentally go up a path you aren’t supposed to and be forced to attempt a K-turn, fail, and instead let the nice Taiga rep finish off the turn for you. Everything’s dandy once you’re moving, though!

Fast or slow, the Nomad proved to be a comfortable ride. I got the feeling that not much would upset its unflustered demeanor. But I will note that the trails I rode on were groomed, so I’m curious as to how the weighty Nomad would fare on ungroomed trails and in much deeper powder.