Massive V for Victory: The Upcoming Cadillac Escalade V Will Be The Largest Performance Cadillac Ever

(By Tom Lohnes) – Late las week, Cadillac released a cool video around it’s V-series lineup of performance cars, which is pretty normal as they’ve been highlighting these hot sedans on social media quite a bit. But among these low, sleek, sports sedans lies a quite literally massive hint at what is coming very soon.

This video really doesn’t have a whole lot to unpack. All we can really see is a large, dark, warehouse with no lighting and a lot of burnt rubber all over the floor. On the left are two of Cadillac’s flagship sports sedans, the CT4-V and CT5-V Blackwing, and across from them are the lesser but still good sporty 4-doors, the CT4-V and CT5-V. Then, in the middle, the massive behemoth that is the new Cadillac Escalade V. Towering above the other 4-cylinder, V6, and V8-powered sedans, this massive, full-sized SUV will most likely pack the LT4 supercharged V8, known for its massive potential in the tuning world. This is a good fit, because this Escalade will most likely be only offered in the long-wheelbase ESV form which weighs in at just under three tons. There is an extremely slim chance that a manual transmission will be offered in this beast, but I wouldn’t hold your breath if I were you. A 10-speed auto will likely be the sole transmission option.

All four wheels will be driven, and a hybrid system might be involved especially considering that Cadillac confirmed that the CT5-V is the last fully gas-powered V car. All will be revealed January 21st, or tomorrow at the time of me writing this. 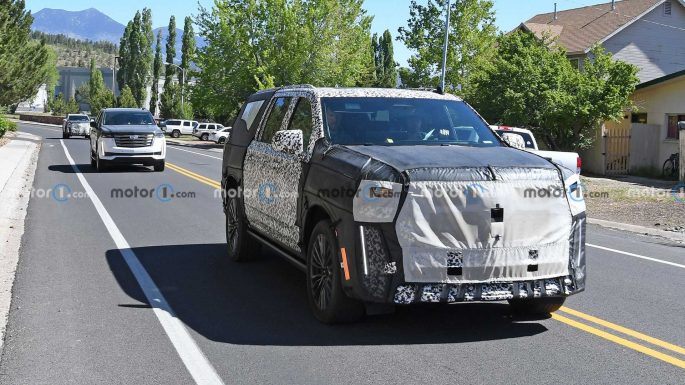