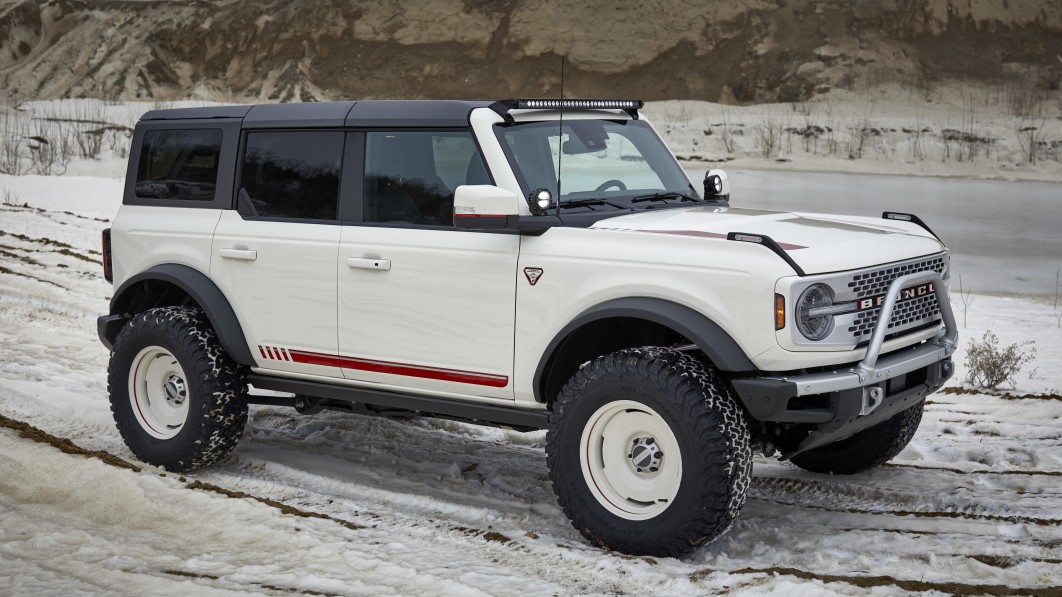 A one-of-a-kind 2021 Ford Bronco is about to be auctioned off for charity. Officially called the Ford Bronco Pope Francis Center First Edition, it takes inspiration from a four-decades-old Popemobile that the Supreme Pontiff used during a historic visit to the U.S.

In October 1979, Pope John Paul II made history’s first papal visit to the White House. During his trip, he toured several American cities and became something of a rock star. For at least part of the trip, he was supplied with an official Popemobile built from a 1980 Bronco provided by Ford.

The 2021 Bronco up for auction doesn’t have quite the same provenance, but proceeds from the auction will benefit the Pope Francis Center in Detroit, a charity for the city’s homeless.

What it does have is a custom paint job in Wimbledon White, an off-white color from Ford’s 1960s palette offered on the original 1966 Bronco (among other cars). It’s based on a First Edition, but has exclusive stripes in Rapid Red, and this one comes with custom wheels, also in Wimbledon White. Other bits, like the grille top section of the Ford Performance front bumper are painted in Iconic (though probably not depicting any saints) Silver.

Other selections from the Ford Performance Parts catalog include an LED light bar, side pod lights, wheel-well rock lights and tube doors with their own storage bags. The interior is custom-painted in Wimbledon White with red accents, and it features bespoke upholstery for the seats in the same general color scheme.

The Pope Francis Center Edition also affords us an opportunity to talk about the 1980 Bronco Popemobile. That truck had its canopy removed and railings installed so the Holy See could stand in the back as it drove. A custom tailgate folded down to form a small staircase for ease of entrance and exit. There were two benches placed longitudinally along either side, and the entire rear area was carpeted and finished in wedgewood blue, an extension of the Bronco’s factory interior color. It’s quite a unique piece of Bronco history that’s often overlooked.