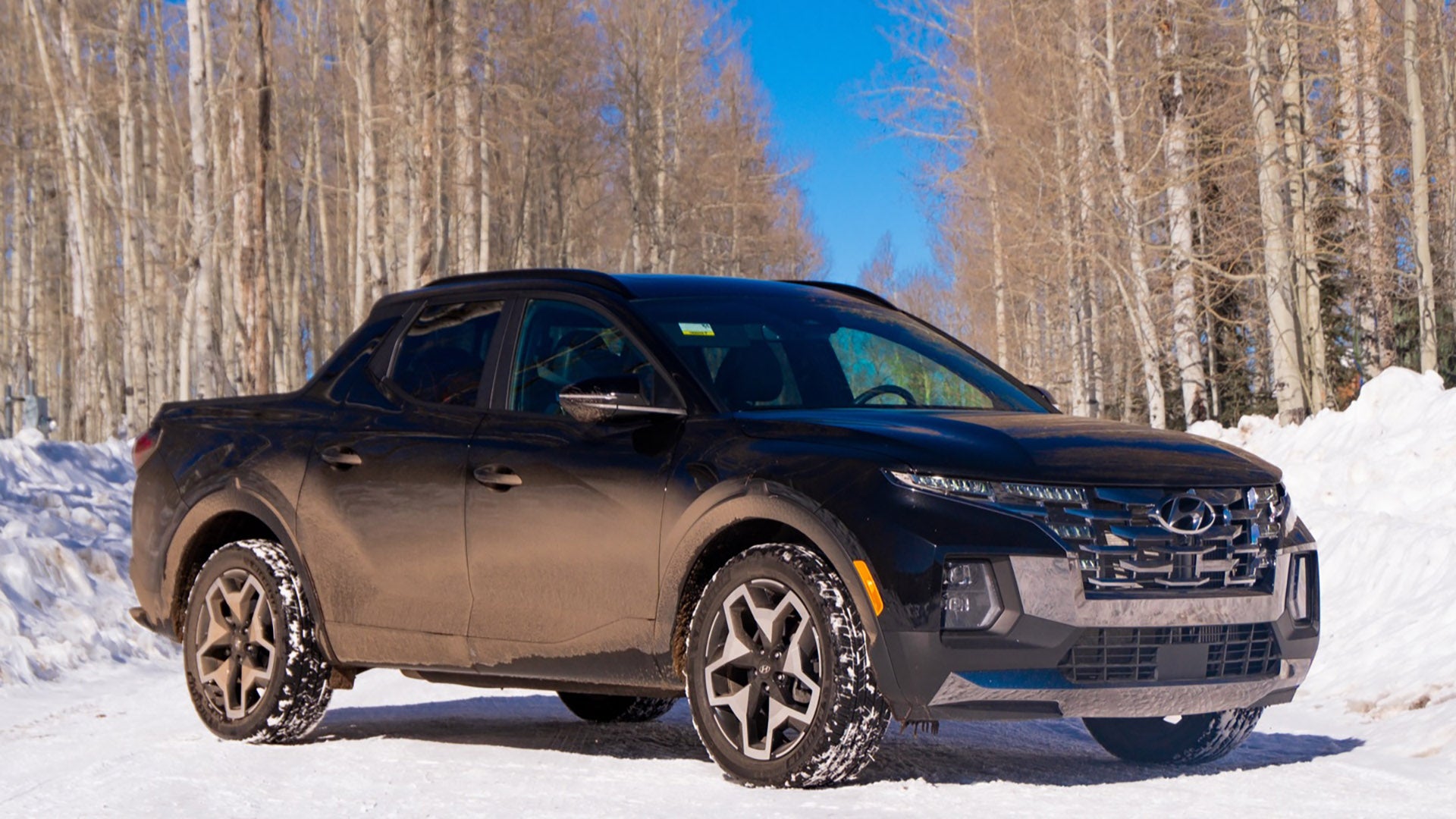 The Highs and Lows

There was a lot to like about the Santa Cruz, chief among them its capability at hauling my kids’ stuff. Near our home is a farm we frequent for outdoor activities and build ice castles during winter. Both required the use of the pickup’s bed, which swallowed our tandem stroller and was used to get our children ready and outfitted for the castle’s cold (you’re not supposed to put children into car seats with winter gear, as it makes them less effective in a crash.)

And each time we went down our mountain, with the truck’s sure footing keeping us out of the snowbank, to pick up food, groceries, or packages, the Santa Cruz went up and down without fail or fluster. It blended seamlessly into our lives. While I would’ve liked to have tested its 5,000-pound
tow capacity or its 1,906-pound payload capacity, I didn’t get the chance but don’t doubt the number based on its performance.

The Santa Cruz isn’t without its flaws, though. As mentioned, the transmission tuning needs some work to be more smooth when accelerating, as well as the issue of in-cabin space for those in the rear seats. There’s also the issue of the truck’s Bose stereo system, which is, to my ears, not great. I played my normal audio test playlist and the eight-speaker system sounded muddled during certain songs and echoey in others. Even after I played with the limited tuning options, it wasn’t as good as other Bose systems out there.

Finally, that in-bed trunk is almost useless. Unlike on the Ridgeline, the Santa Cruz’s trunk is much shallower due to the spare tire mounted to the underside of it. And as such, it doesn’t really offer a lot of utility comparatively. You can still fill it with ice and use it as a cooler, just don’t think you’ll be able to fit a full-size Monster in there.  That said, the in-bed lights are brilliantly bright even in the dead of night.

As for its competition, there’s not a ton out there at the moment. You’ve got the Ford Maverick and the Honda Ridgeline, though the Ridgeline is bigger than the Santa Cruz, as well as more rugged. I personally love the Ridgeline and The Drive gushed all over the Maverick during our first test last year. So the competition is stacked.

For as economical as every new vehicle is becoming, the Hyundai’s gas mileage isn’t all that great. The company states that the 2.5-liter turbocharged four-cylinder nets 19 highway, 27 city, and 22 combined, but going up and down and around town just outside of Park City, I average between 17 and 20 mpg. That’s not good enough for something as small as the Santa Cruz. It should be noted that Hyundai (and its corporate cousin Kia) is, as a brand, making a wildly compelling push into EVs that would’ve felt unfathomable even a few years ago. But with this truck’s more conventional gas-powered engine, I’d really like to see the brand do better.