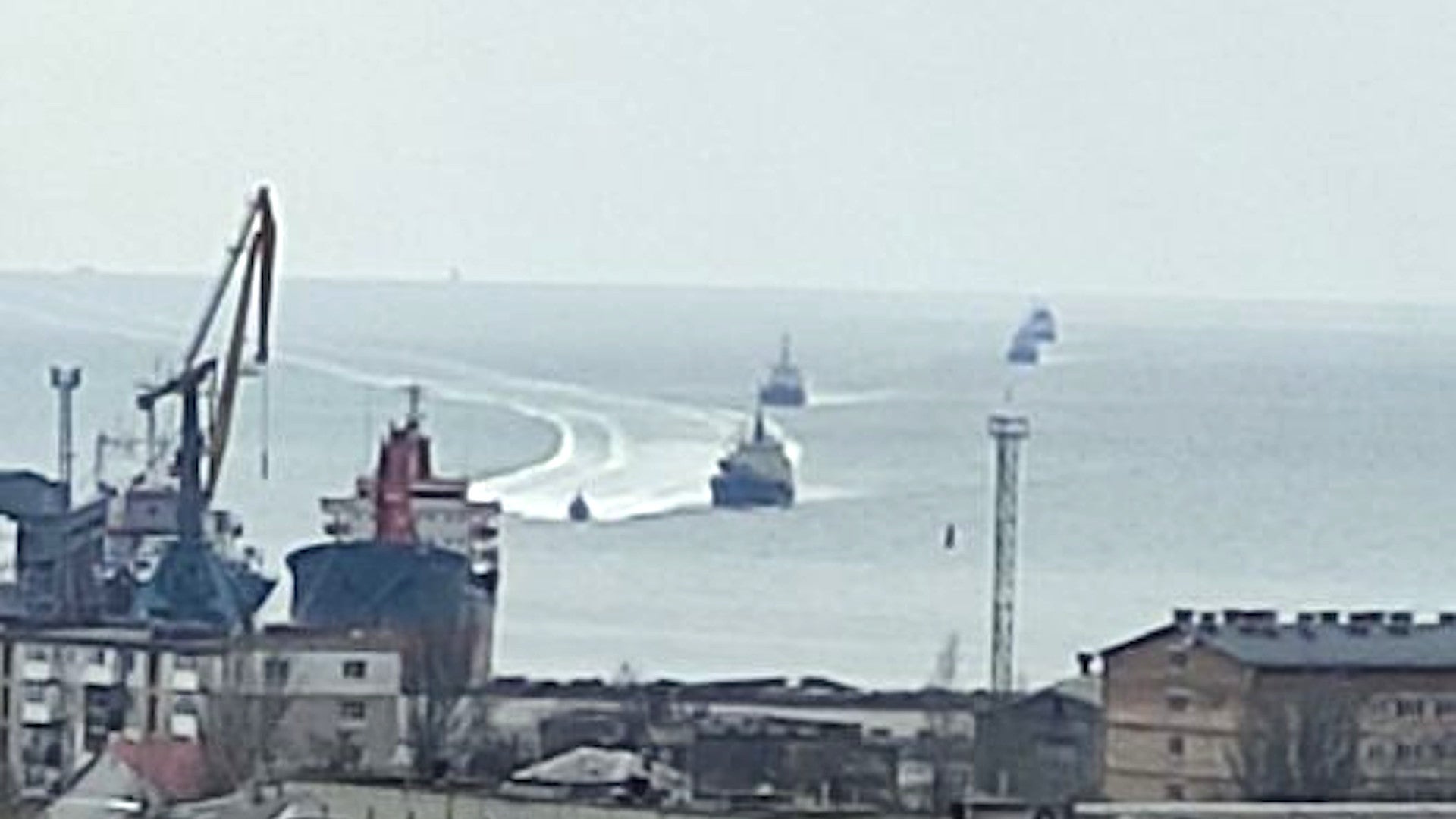 Russian forces in Ukraine look set to close another day of fighting at the very best having made limited new gains. In the meantime, they continue to target a number of encircled cities to routine air, missile, and artillery strikes, which has led to hundreds of civilian casualties and driven millions more from their homes. Today, Russian warships arrived at Berdyansk, an occupied city on the Sea of Azov that is situated near the key port city of Mariupol, which remains in Ukrainian hands. Local authorities in Mariupol, which has been subjected to a particularly brutal siege for more than a week now, said today that a convoy of civilians had finally been able to safely flee the area.

Before diving into the latest news below, readers should be sure to get themselves up to speed on the state of the Kremlin’s invasion of Ukraine, which is now in its third week, with our prior rolling coverage here.

Russian Navy amphibious warships and other vessels arrived in Berdyansk earlier today. Russian forces claimed to have first captured this port city on the Sea of Azov on February 27, just days after the invasion kicked off.

In addition, Russian forces in Berdyansk showed off captured Ukrainian hardware, including some 10 navy and coast guard vessels, to reporters from the quasi-state media outlet RT. At least two Ukrainian Gyurza-M class patrol boats are among those now in Russian hands. Russia’s security services had previously seized a pair of these vessels, along with a Ukrainian Navy tug, during an incident in the Sea of Azov in 2018, before returning them the following year.

The appearance of additional Russian forces in Berdyansk comes as the Kremlin continues to try to tighten its grip on Mariupol, also on the Sea of Azov and still under Ukrainian control, to the northeast.

Local authorities in Mariupol said that an evacuation convoy consisting of 160 civilian cars was able to safely leave the city today. They added that those vehicles had then successfully made it past Berdyansk and were heading toward Zaporozhye to the north, which remains in Ukrainian hands.

Mariupol remains a key objective for Russian forces in Ukraine. Capturing the city can only help them fully secure the coastline along the Sea of Azov, which provides a landbridge between western Russia and the occupied Crimean Peninsula via breakaway areas of Ukraine’s eastern Donbas region. Dmitry Peskov, Russian President Vladimir Putin’s top spokesperson, said today that Russian forces may well push to take over other major cities in Ukraine, something that has long appeared to be part of the Kremlin’s overall operational plan.

Ukrainian authorities have tried multiple times already to help civilians evacuate from Mariupol through designated “humanitarian coordinators” negotiated with Russian officials. All the previous attempts have failed amid accusations that Russian forces refused to honor temporary ceasefires to allow convoys to leave the area safely. Hundreds of thousands of civilians still remain trapped in the city. Earlier today, it had been reported that Ukrainian officials had still not secured sufficient guarantees regarding an evacuation from Mariupol, despite having negotiated safe passage for civilians leaving other cities.

For more than a week now Mariupol has been encircled, cutting off supplies to the city. Officials there have said that residents have been without running water and heat for days now. Routine and indiscriminate Russian shelling and other attacks have left the city increasingly devastated overall. Mariupol was notably the site of a now-infamous strike on a children’s/maternity hospital last week. A pregnant woman who was seen in one of the pictures taken in the immediate aftermath of that attack has now reportedly died along with her unborn child.

Ukrainian forces in and around Mariupol have refused to cede the city and are still fighting against Russian forces. The video in the Tweet below reportedly shows Ukrainian forces in a BTR-4 wheeled armored personnel carrier engaging Russian armored vehicles in relatively close-quarters street-fighting.

Russian air, artillery missile strikes continue to pound other major cities in Ukraine, especially in the eastern half of the country, including the capital Kyiv. Wladimir Klitschko, brother of Kyiv mayor Vitali Klitschko, posted the video below on social media today showing some of the damage inflicted on that city.

The video below reportedly shows the remains of an intercepted missile falling inside Kyiv.

The skies over Ukraine continue to be contested even after more than two weeks. Ukrainian forces are still employing ground-based air defenses, including shoulder-fired surface-to-air missiles, also known as man-portable air-defense systems (MANPADS), to great effect. The Russian Ministry of Defense released a video today, seen below, showing an Su-25 Frogfoot ground-attack aircraft that it said made it back to base after being hit by a MANPADS.

Ukrainian President Volodymyr Zelensky claimed yesterday that the Russian military had lost nearly 13,000 personnel, as well as dozens of planes and helicopters, among other things. Those numbers are much higher than independent estimates and cannot be readily confirmed.

There were reports today that at least one Tochka short-range ballistic missile loaded with cluster munitions hit the city of Donetsk, which has been under the control of Kremlin-backed separatists since 2015. Ukraine and Russia both have stocks of these missiles and have employed them in the conflict already. Separatist authorities have blamed Ukrainian forces for the attack, but also said that they had intercepted the missile, raising questions about whether the city center was the intended target.

A video has emerged online that reportedly shows a modified BMW 6 series convertible with a 12.7mm NSV heavy machine gun fitted at the back. It’s unclear whether or not this car is actually being employed as a makeshift combat vehicle.

Ukrainian authorities say that the fourth round of negotiations with Russian officials, which began earlier today, has now been paused until tomorrow. The talks today were conducted via video conference unlike previous meetings, which were held in-person at a site near the Belarusian border.

Energoatom, Ukraine’s state-run nuclear enterprise, issued a statement saying that Russian forces had conducted a controlled detonation of explosives at the Zaporizhzhia Nuclear Power Plant and that more were planned. It’s unclear why Russia’s military is carrying out this activity at this nuclear power plant, the largest in Europe, which it took control of last week.

Potential risks to nuclear infrastructure in Ukraine continue to be of general concern. Power was reportedly cut again to the site of the now-defunct Chernobyl power plant. A spent fuel rod storage facility and others there need outside power to continue to operate safely.

Israel has said publicly for the first time that it will comply with international sanctions against Russia.

Russia has denied U.S. government claims that it is seeking military assistance from China to continue its operations in Ukraine.

We will continue to update this post with new information until we state otherwise.